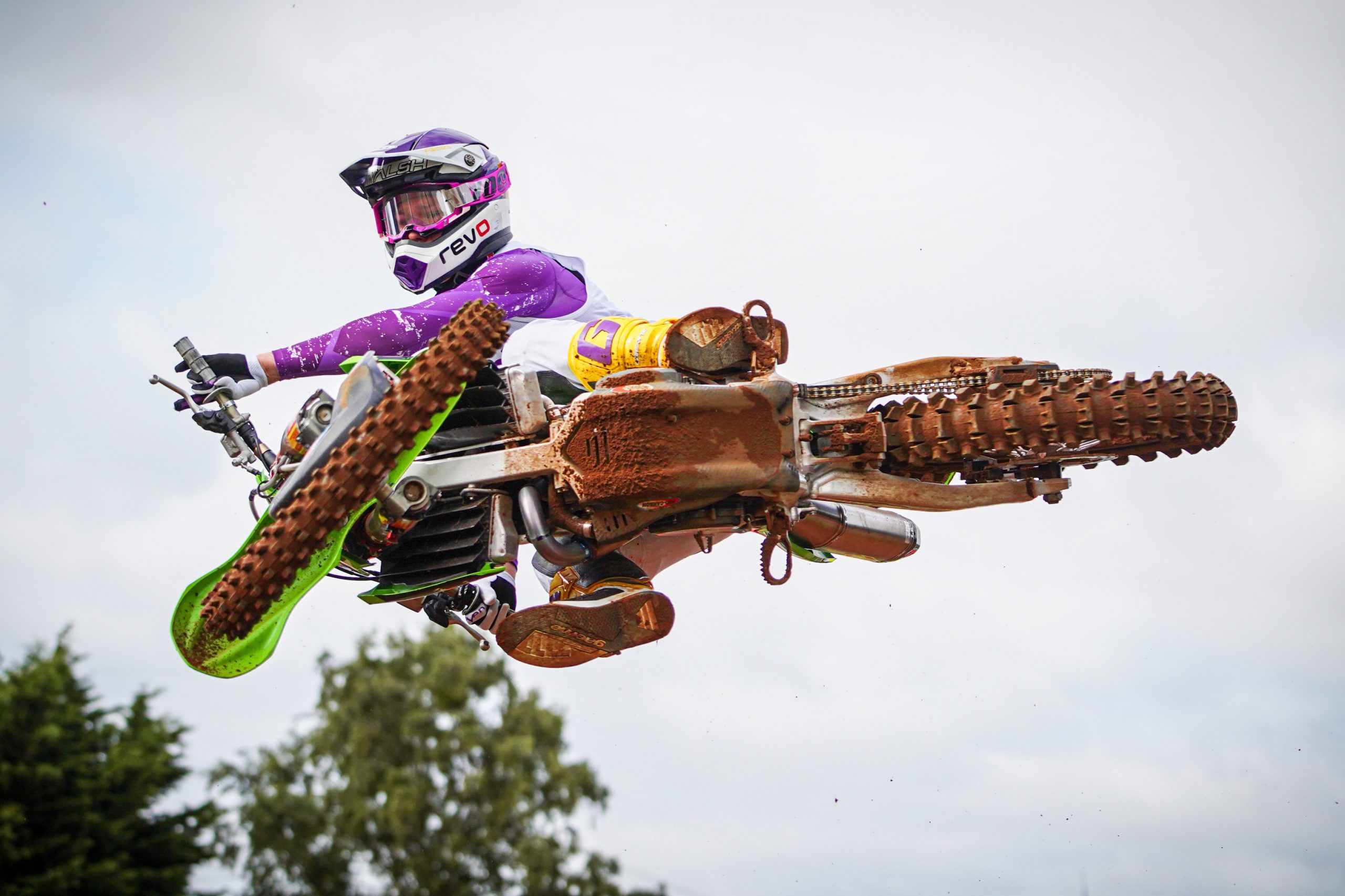 REVO Seven Kawasaki’s Dylan Walsh was in action on Sunday at round five of the 2021 REVO ACU British Motocross Championship fuelled by Gulf Race Fuels at Blaxhall in Suffolk.

An electrical problem kept the 23-year-old London-born Kiwi
off the podium but the event highlighted his continued recovery from a serious foot injury sustained at Foxhill last month – and also showcased
his team’s skills with a complete engine change undertaken in just 30 minutes.

Dylan had been running fourth in the opening MX1 moto before technical issues dropped him down to seventh. A change of motors between races failed to rectify the problem and he was forced to DNF but it was still a day of positives for the team.

“It was an eventful day thanks to an electrical gremlin. Dylan qualified fourth which was good and there’s no real problem with his foot – it was sore but he’s a tough guy.

“In the first moto he started to lose time lap-after-lap but managed to limp home seventh and the way he explained it, it sounded like engine issues.

“Obviously, we carry brand-new race engines so we swapped it out in 30 minutes – the team are so professional – and the bike sounded great but three laps

into the second moto it started to do exactly the same again.

“It’s obviously an electrical component and heat-related and Dylan was forced to DNF.

“When the bike had cooled down it was fine so we’re going to go through it, check everything and get it on a dyno and run it as hot as we can before getting it back out on a track to test it.

“It’s a shame but if we’relooking for positives his foot was okay. We went there just to get a race under our belt. There’s no pressure racing for a title anymore.

“The lads all worked in unison to change the engine. They knew what they had to do, each had a job to do and didn’t get in each other’s way.

“I am disappointed but it’s just one of those things and we got some bike-time for Dylan which is the main objective. There’s no pressure – he does just need to get some races under his belt.

“There were some horrendous downpours but the track held up and the club did its usual good job – the presentation was mega and I wish that all British rounds were like that because it was really well done.”

A technical issue kept Dylan off the podium at Blaxhall

“I’m feeling not too bad. It was a strange day yesterday – it’s positive that my foot’s feeling

better and I can get back to training properly but the technical problems we had are just one of those things.

“It was mentally tough. It was one of those races where things didn’t go our way but there’s not a lot we can do about that. I’m not a big fan of the track – I don’t like the soil – but I felt better than I expected. Obviously, my foot’s not perfect but we’ll keep work- ing on it and it will be sorted out in a few weeks.

“The team smashed out the engine change fast. It’s just a shame it was a different issue but I can’t fault them. It was good to see that they can do it under pressure and I have total faith in them.

“It was a difficult day but it’s not the end of the world and it’s something we can recover from quite easily.”